I won't go into a long explanation of why I haven't updated the blog for nine months, but it has nothing to do with giving birth or anything interesting like that.  Inertia, not having a very interesting life, not wanting to sit in front of the computer any more when I work in front of one all day.......

This year, I participated in an ornament swap and we all are supposed to blog TODAY about what we received and what we sent.  Tricky for me because I've been out of town.  While supper simmers (braised radishes and such, based upon a japanese recipe for braised daikon, which is in there along with celeriac and purple radishes and.....I digressed) I am getting a post together.

When I received my swap partner, I was excited and nervous.  It's someone I have known for a loooong time, so I was glad to have a friend - but she is an exceptionally skilled bead artist and teacher, and artist in other areas, so I knew that what I made would be nowhere in her league.  And here it is: 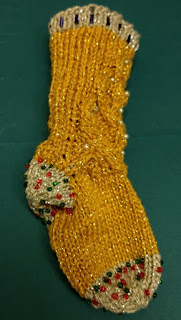 It's a very simple knitted sock in a sparkly cotton yarn with a few beads added.  I had gift deadlines, and lots of travel, and then flat-out forgot.  So while I received something very lovely: 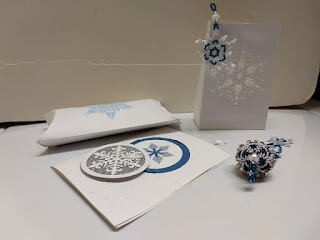 Which included a handmade box, and handmade card, AND luminaria (because it was supposed to arrive during Hannukah, but I was traveling and didn't pick up the package until after), and TWO beautiful beaded ornaments.  Here's a better photo of them: 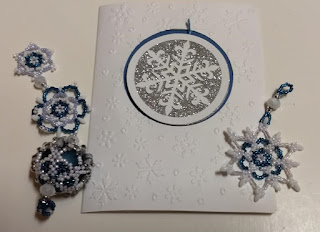 Yep, exquisite.  And all she got was a sock.

A couple people asked about it.  The basic pattern is - a sock.  I found a cable in Donna Druchunas' Spiegel Socks pattern that looks something like a Christmas Tree, although it doesn't show up as well as I'd hoped on the sock I knit: 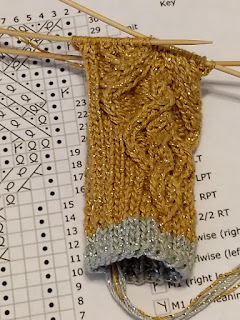 That shows it just after I finished the cable, before I went into the plain foot (due to lack of time, and my hands starting to hurt from doing fiddly things in stiff cotton yarn on US#0 needles), to which I added an afterthought heel (because I didn't want to have to do math or a gusset), and yes, I made a goof but luckily this sock is not to be worn by anybody: 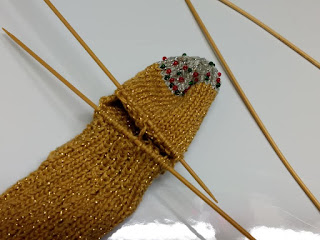 One handy thing I learned, since I was doing this whilst traveling, is that airplane tray cupholders are very good for corralling beads while you string them: 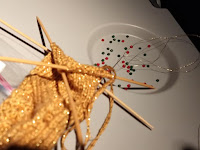 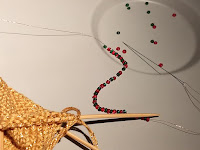 To summarize the materials:  Aunt Lydia #10 crochet cotton, used double, in gold (because I had to run out to get more and the shop didn't have silver) with silver (left over from a weaving class I took from John Mullarkey at last year's DFW Fiber Fest) ribbing at the top, toe, and heel.  Shown with the beads is some metallic gold sewing thread I used for attaching beads.  The red and green were knitted into the toe and heel; the pearls and blue bugle beads were sewn onto the sock: 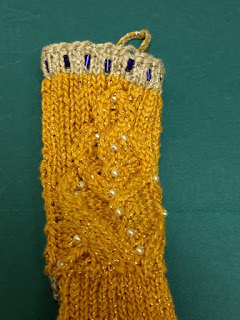 The beads are from my stash, and are old, and except for the pearls are appropriately sparkly.

Because I don't have cardmaking skills, I included a card from Hartford Prints! which I purchased last year or the one before.  They do really lovely letterpress work and it shows a stylized Hartford skyline: 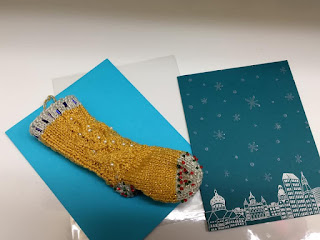 Apparently my package has not yet arrived, although it was promised for yesterday.  You can see what Karen said about the items she made on her blog.
Posted by MLH860 at 6:51 PM

Margo, your ornament is so beautiful, how creative!!
I haven't made knitted socks in forever.
I love it!!